There are two reasons for low salt. Use the “Options” to check the salinity. If the salinity says low – the tub either needs salt or the cartridge unit is failing.

Whenever you add water you will need to put in a Vanishing-Act ball for about 24 hours. This absorbs calcium which preserves the cartridge.

There are 2 partially used Vanishing Act balls in the hottub box. Just drop them in and leave them for 24H.

Yobit is a crytpocurrency exchange. They have recently begun a marketing campaign to mint coins. They have effectively stolen over 8 million coins from my account.

I have repeatedly contacted them with no meaningful response from support.

Selection Basis. These picks are based essential need of the FED to avoid a massive system crash due to banking system failure multiplied by the 3 wave dip-leverage.

They exploit reverse-risk-leverage. The FED is terrified of massive system failure – and sign weakness in the banks will trigger the big one. They have nothing to do with quality of the underlying stocks – only the urgent need of the FED to avoid any sign of weakness.

XLF: Low interest rates are normally death for banks. The banking sector is ridiculously propped up. The FED dumps Massive $$$ into banks to inhibit awareness that they are walking dead. XLF is massively leveraged and the FED cannot allow any perception of weakness in the banking sector which would prompt fear of credit freeze & massive crash. Fear Factor: Banks in general. Linked to Society Generale, JPM, Citibank, BOA…

MSFT Selection: Bastard sibling of the FANG stocks. More leverage than actual FANG stocks due to lower price, but moves in tandem. Higher yield on options than with FANG sticks. Fear Factor: FED must protect face by propping up tech sector, aka FANG, else exposure of mass systemic failure.

Entered XLF & AG Fri AM during Fed Pump. Overpaid. Should have let the pump wave pass & bought in later in day during dip.

Sat Update – Alt News cycle starts to echo 2Q instability in Banking Sector. Predicted Fed response is to inflate Bank Stocks to project stability. Repos go to 4.3T to keep banks in business. Only choice appears to be to pump $$ into banks. Fed has $700B in rainy day funds to use in next 2 weeks. [Prop up the banks?]

Strategy is to hold XLF pending Mon/Tues liquidity pump to lift Banks, etc. Normally these events would push market down, but will be used as cover to push insane amounts of liquidity into banks, $700B. I predict this will appear as a large boost to equity prices in the financial sector.

Note how the China Trade Deal was Floated again:

The CCIOA Act defines “Common Elements” as real estate explicitly owned or leased by an association. [Case law later expanded this definition to include any property which is commonly used within a community.]

“Common elements” means:(a) in a condominium or cooperative, all portions of the condominium or cooperative other than the units; and(b) in a planned community, any real estate within a planned community owned or leased by the association, other than a unit.
An easement is not real estate. It cannot be considered a “Common element” within the statutory definition.
As worded – the declaration suggests the road itself (true real estate) is to become a Common element – and thus RERA appears to seek title to real estate that it does not own.
The community must be sensitive to this because the CCOIA requires “Filing the declaration in the same manner as a deed”.
The only legal description in the “Declaration” encompasses the entire road association area, thus enclosing, possibly claiming, all of our properties.
Any filing that could ever be interpreted to assert a claim of ownership on our real estate would soil title of every landowner in the area. PERFECT clarity of the legal definition of any assigned “property” is essential in any such filing.
Note also that RERA does not, and can never meet the statutory requirements to be or ever become a CCIOA.
It was incorporated too late, 1988. § 38-33.3-301. Organization of unit owners’ association. A unit owners’ association shall be organized no later than the date the first unit in the common interest community is conveyed to a purchaser.
§ 38-33.3-201 (1) A common interest community may be created pursuant to this article only by *recording a declaration executed in the same manner as a deed and, in a cooperative, by **conveying the real estate subject to that declaration to the association.
*The language “recording a declaration executed in the same manner as a deed” appears to mandate a declaration of ownership of property to the Association.
Assigning a deed requires three elements, 1) an assignor, 2) an assignee, and 3) proper legal description of the property being assigned.
The only legal description within the “Declaration” describes several square miles of property belonging to 150+ landowners.
Only the 1) assignor, as signatory, is included declaration submitted for our review.
This is why I used the language “Blank Check” to describe “Declaration”. Neither the recipient, nor the amount(property) is described in the legal Declaration.
**If you were to argue we are a cooperative, which we are not, RERA was never conveyed any real estate.
Since the CCIOA would be invalid from it’s inception, so would any protections from liability from CCIOA would void. *******************
RERA does possess title to an easement for road maintenance.

This experiment is in search of an affordable floor.  At 2000 sq/ft, a 4 inch thick floor is about 25 yards, 3  truckloads of concrete, about $3K in concrete, delivered.

A week rental on a concrete sander prices out at about $1000.

So – the hard DIY price on a sanded concrete floor is $4k.  Since I have a mountain full of dead wood – maybe I can find a cheaper solution… END_OF_DOCUMENT_TOKEN_TO_BE_REPLACED 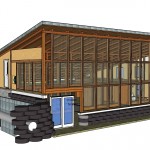 I’ve had a lot of requests for our 3D model.  The model is very accurate and has been used as a working reference in every stage of the build so far.  The square footage is about 4500.  The greenhouse is about 900 sq ft, and 16,000 ft cubic foot.

If the budget holds, the final construction cost will be between $25 & $30 per square foot – which is the least expensive residential code compliant home built in Colorado in a good many years.

For the uninitiated you can download sketchup here.  It’s an excellent free program formerly from google, and now owned by a Boulder company.

Thursday March 20 is a site tour.  We’ll be arriving about noon.  If you want to check it out – just follow the directions above.  Here is a series of views exported from the model. 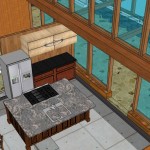 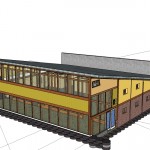 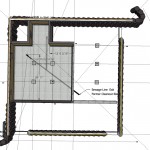 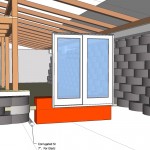 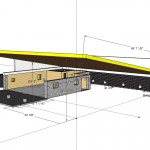 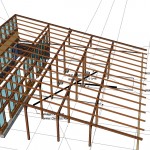 We’ve been way busy getting to dry in.  All have done a super job.  We have a hard windy day ahead with cold weather on heel.  So pardon the terse.

This video shows how to install wiring in a flat roof that has no crawl space.  There are a few requirements:

Check out this loaf of bread brought up by the Bensteins ! 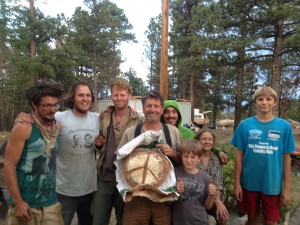 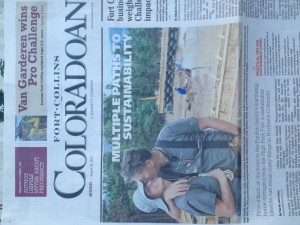 Me kissin’ Linda standing on the pile of lumber we cut for the house.

Monday morning we awoke to our picture on top half of the front page of the newspaper.

Who ever thought me smoochin’ on Linda would be newsworthy – let alone front page material. You can check out the article at the Fort Collins Coloradoan.

The build is proceeding very well.  We’re on the move… 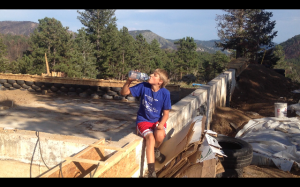